Someone in the Pentagon may well have thought of this already, but I'll mention it just in case I'm wrong.

Saddam Hussein likes to build monumental statues of himself. Here are two examples from a quick Google image search: 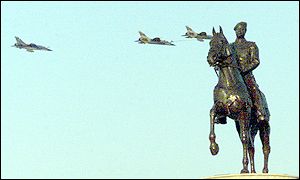 I don't know if these are different statues, or two views of the same one, but even if they are the latter, I'm sure there are plenty more.

It seems to me that a good first move in the upcoming Iraq campaign would be to send some cruise missiles to destroy these statues, or (even better) knock off their heads while leaving the bodies intact.

(Since we are not at war with the people of Iraq, it would be a very bad idea to destroy the monuments to the Iran-Iraq war, e.g. the Iraqi equivalent of the Tomb of the Unknown Soldier. But statues of Hussein are surely fair game: it's not as if any of them have much esthetic value.)

I would guess that at least some of the statues are non-equestrian, i.e. standing pedestrian Husseins. If so, they would make good targets for a subtler attack. Would it be possible to send a drone or cruise missile containing an appropriate quantity of brown or yellow paint, to be splattered over the seat of the statue's pants (if brown) or the crotch area generally, both front and back (if yellow)? I imagine American technology could handle that relatively simple task.

The only down side I can see to such a move -- though it is not to be underestimated -- is that such damage might cause innocent Iraqi civilians to be tortured or murdered. After decades of living under Saddam Hussein, Iraqis are quite skilled at keeping a straight face in all circumstances, but I imagine some of them -- particularly the children -- might find a sudden image of Hussein crapping (or pissing) in his pants too much for even their well-developed talents for dissimulation. An ill-timed smirk or giggle could be fatal. Of course that is itself one good reason to overthrow Hussein.

Lovely thoughts, Doc. Seems like an awful lot of work, though. :)

Show me the money! (I finally decided to answer the Shropshire Challenge. It's good until the last day of December 2002.)

[The remainder of this 1,231 word cut-and-paste comment has been deleted. If you want to read it, go over to WarbloggerWatch. It had nothing to do with this post.]

Yes, but psychological warfare is effective, so a cruise missile might conceivably do more good not killing someone. Besides, the pot-of-paint approach wouldn't require one of those big Gulf War I missiles, just one of those mini-drone things we heard about in Afghanistan.

These statues should remain untouched by American hands. Their desecration should be a privilege reserved for the Iraqi people. The only thing we should do is make sure our ground forces take lots of pictures of smiling Iraqis taking the statues down.

(From a practical standpoint, there's nothing we can do to make Iraqi civilians hate Saddam more. He's done enough to make them hate him already. And to hurt the morale of the soldiers, there are better methods. But you make a good point about leaving the other monuments alone.)

The interesting thing is that destruction of the statues was specifically forbidden at the orders of Defense Secretary Cheney at the beginning of the Persian Gulf War.

Destroying them now would certainly send a signal.

I've often thought about this. The one I specifically want to see in the laser designator footage at a press conference (just before the screen whites out) is that pair of ridiculous swords that span a highway somewhere in Baghdad. A nice Paveway right at the base would be lovely.

you don't need cruise missiles. the birds are doing a fine job on their own. the statue of him at the main square in baghdad university has to be cleaned every couple of days because they seem to enjoy relieving themselves on his head.
the cleaning is not helping either, something in the bird doo-doo is leaving yellow streaks all over the face.
the pictures are of two different statues, the one below is much bigger than the one with him riding the horse (that was done to celebrate our "victorious" mother of all battles)that's the horse riding incident saddam and mubarak (of egypt) had their childish arguments about.

Um, David, the crossed swords is one of the Iran-Iraq monuments Weevil was talking about as needing to be excluded from damage.